The City of Santa Cruz, in partnership with Jump Bikes, introduced bike share to Santa Cruz in May 2018. Bike share provides affordable short-term bike rentals for quick trips within City limits and brings a new transportation option to the community. Why use a Jump bike rather than ride your own? Bike share is a great option if you don’t own your own bike, don’t want to maintain a bike, are worried about theft, or if you simply want the convenience of having a bike whenever you need one.

Each of the 250 JUMP bikes features electric assist, which provides a boost when you pedal and makes bike share a great option for getting up the hills of Santa Cruz. Find out more about the City of Santa Cruz’s partnership with Jump Bikes, including bike locations, rates, frequently asked questions, and bike safety tips, on the City’s Bike Share Santa Cruz webpage.

Download the Jump app today and electrify your commute! 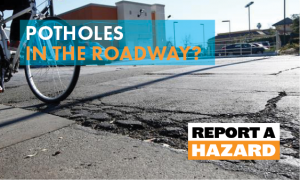 Help us by reporting potholes, unsafe street conditions, or needed improvements you see on your bike commute.

Learn the Rules of the Road and how to pedal safely and legally in Santa Cruz County. Plus, know what to do if you’re involved in a crash.

By combining transit with a bike ride you can extend your pedal-powered reach much further. All Santa Cruz Metro buses are equipped to carry three bikes on the front bumper. Find bike rules for the various transit agencies in and surrounding Santa Cruz County.

Set up a workplace bike program to share your bike commute with coworkers.

Bike racks and lockers are a secure way to store your bike for a few hours or a whole day. In the City of Santa Cruz, lockers cost only 5 cents an hour, paid by pre-paid ParkCards or BikeLink cards.

Bicycling is an excellent way to minimize car use, save money on gas and get exercise all at the same time. Get started planning your bike commute and check out our useful tips and informative maps.

Find your way by bike around Santa Cruz County and beyond