The Department of Public Works has constructed a temporary fix while it works with State & federal partners on a long-term repair plan. 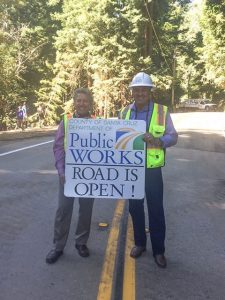 Closed indefinitely on Feb. 13 due to winter storm damage, Soquel-San Jose Road is a major north-south transportation route and provides access to hundreds of residents who live along the road and in adjacent neighborhoods.

The County Department of Public Works has constructed a temporary fix while it works with State and federal partners on a long-term repair plan for the road.

“We know this road is a critical piece of our local transportation infrastructure,” Public Works Director John Presleigh said. “I’d like to thank my staff for the urgency and innovation they brought to this project on behalf of local residents.”

“Soquel-San Jose was one of the storm-damaged roads identified as a priority repair,” Board Chair John Leopold said. “That we were able to get it opened as soon as we did is a testament to the hard work and experience of our staff. I’d particularly like to thank neighbors impacted by this closure for their patience.”

The Department of Public Works would like to remind travelers that while Soquel-San Jose is now passable, the road has not been completely restored. Secondary damage sites restrict traffic to one lane in places, and caution is advised. 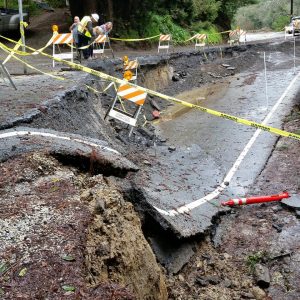 Repair work continues at this location. The Public Works Department removed the blacktop from the site and built a French drain along the road to help with drainage and prevent further slides. They are now placing and compacting engineered fill on the site, and assessing its stability.  If it proves stable, they will place the remaining fill and then pave with asphalt. If the fill option is successful, the road could be open in a few weeks. If not, plans have simultaneously been completed for a temporary bridge that would take another 6-8 weeks. Ultimately, the department plans to build a permanent bridge at the site to prevent this slide from happening again. 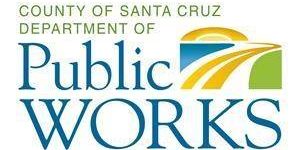 For a listing of all county road closures, visit www.sccroadclosure.com.