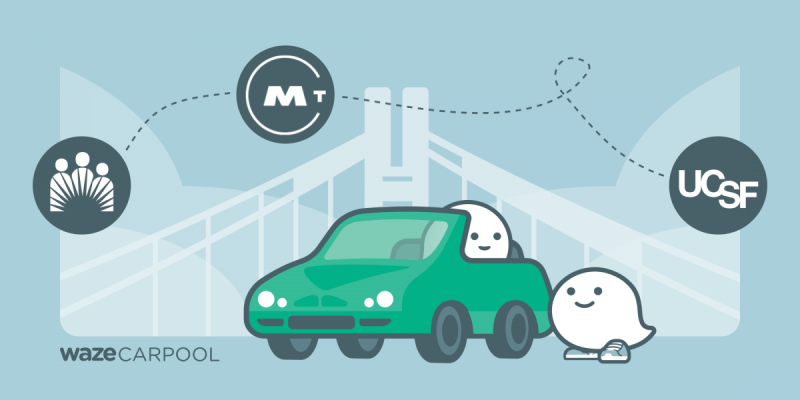 Moving from a pilot program begun last year, Waze Carpool now operates in nine counties in and around tech-savvy Silicon Valley and San Francisco, “from as far north as Sacramento to as far south as Monterey,” Josh Fried, head of business development for Waze, told Forbes. In the latest step, it’s also working with Kaiser Permanente hospitals and the University of California, San Francisco in a program backed by the regional Metropolitan Transportation Commission aimed at curbing traffic congestion by getting more people to commute together.

Unlike ride-hailing services Uber and Lyft, Waze Carpool pairs up riders and drivers through the navigation app who live or work in close proximity to one another. In the arrangement with Kaiser Permanente and UC San Francisco, employees are encouraged to use Waze Carpool rather than drive solo. Waze’s earlier pilot program started out last year by offering Carpool to Google employees at the company’s many Bay Area campuses.

“Because of UCSF and Kaiser Permanente’s large employee base and proximity to one another, using Waze Carpool expands the options available for commuters who want faster and cheaper alternatives to driving alone,” Steve Heminger, MTC’s Executive Director, said in a statement.

To use Carpool, participants provide basic information, including a photo, a Facebook or LinkedIn profile, vehicle details and an email address. Using a credit card preloaded onto the Waze Rider app, riders pay those who drive just 54 cents per mile, the current IRS reimbursement rate for business travel by car. That means the cost of a trip using Waze Carpool is a fraction of taxi or conventional rideshare fees — and not a revenue generator for the company, at least not yet in the U.S.

Drivers are also limited to providing just two rides per day, so it’s not designed as a moneymaker for participants, Fried said.

“Our goal with prices is to make them as attractive as public transit, but with more door-to-door service,” Fried said. “We are not collecting a fee, but eventually we will.”

Waze encourages users to share information on road and traffic conditions in real time to improve navigational advice, and the company estimates it has more than 75 million users globally, making it the world’s most heavily used navigation app. It’s got about 900,000 users in the Bay Area, according to the company.

Alphabet’s Google Maps group long ago amassed a lead in its field, and the company’s Waymo self-driving car technology unit is preparing to supply hardware and software to automakers that ultimately makes cars both driver- and accident-free.

Carpool already operates across Israel, where Waze is headquartered. There the company keeps a “small” portion of the total payment for each ride, Fried said. The goal isn’t to create a competing service to Uber and Lyft.

“We have no intention of going above the 54-cent IRS cap as that brings us into a whole other type of service and we’re very committed to keeping this as a not-for-profit, share the expense type of carpool, for regular people going to and from work,” he said. “There’s no way to become a professional Carpool driver — it’s about a ride to work and a ride home.”

The service is going to expand into other large, congested U.S. regions where Waze is heavily used, Fried said, though he declined to identify the next markets.

“We’re not really positioning ourselves against the ride-hailing services. Those services work well when you’re only trying to go a mile or two,” he said. “Our service is designed for people who have commutes that are going to take them a decent amount of time and they want to fill their vehicles so that they’re not the only person heading in that direction.”

Artiicle adapted from Forbes.com – Google’s Waze App Is Morphing Into A Low-Cost Congestion Fighter Via Carpool