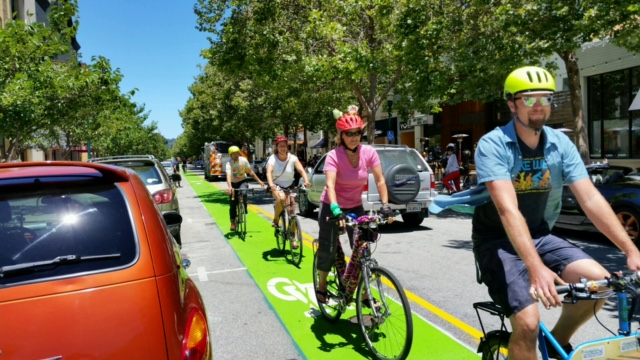 The City of Santa Cruz Traffic Engineering division will soon complete the Pacific Avenue Contraflow Bike Lane between Church and Cathcart streets. The public is invited to a ribbon-cutting ceremony on Tuesday, June 27, to celebrate with City officials and community members. The lunchtime event from 12:15 p.m. to 1 p.m. at Assembly Restaurant Patio, 1108 Pacific Ave., will include a presentation for bicyclists, drivers and pedestrians titled “Contraflow Dos and Don’t.”

The Contraflow Bike Lane Project will allow two-way bike traffic on Pacific Avenue with the new green contraflow lane for southbound bicyclists and new painted sharrows designating the northbound lane to be shared between cyclists and vehicles.

The contraflow lane includes solid green lane treatments to increase the visibility of the new lane and clarify the rules of the road for cyclists, drivers and pedestrians. Stop signs for cyclists are being installed at each stop controlled intersection to direct cyclists to yield right-of-way to pedestrians in the crosswalk and traffic crossing the intersection. The project also includes new bike lanes on Pacific Avenue between between Cathcart and Laurel streets.

The project is funded by $85,000 in Transportation Development Act grant funds.

The City is extremely grateful to the owners of Assembly Restaurant for donating the use of their patio for the ribbon-cutting event.

For more information including a list of Contraflow Dos and Don’ts, visit www.cityofsantacruz.com.